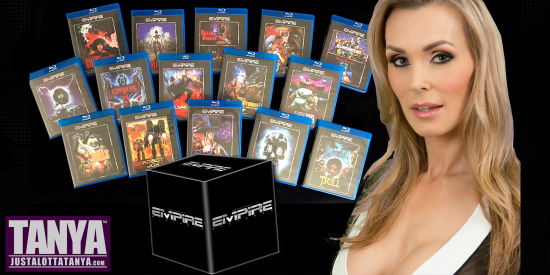 I got my hands on the Empire Pictures box set from Full Moon and its PACKED with 80’s cult movies! Want to see what’s in the box?

When Full Moon announced that they were putting together a box set of the Empire movies, I was excited. I wasn’t as familiar with the company as I was with the later Full Moon films, but I was aware of some of the movies. I was looking forward to watching some of these films that I might have only seen the VHS box covers for long, long ago.

So I finally got my hands on a box and I have to tell you. It’s pretty damn cool. Have a look at my video and I’ll show you what’s going on!

Ok, I wanted to mention that the texture of the box is pretty nice as well. It doesn’t feel like plain cardboard, which was a pleasant surprise.

Another thing that I did mention in my video is that just about all of the movies have some type of special features like Commentaries, Galleries, trailers, all-new retrospectives and much more. There is quite a lot of content here.

As you may have already figured out since there are 18 movies and only 15 discs, some are doubled up on and I’m ok with that.

This really is an incredible set. I am just starting to go through it all and I already know its going to take me awhile. Is this a must-have? If you love Sci-Fi, Horror and cult movies in general - YES. For what you get, it’s a really good price. Get yours from FullMoonDirect.com

I got my hands on the Empire Pictures box set from Full Moon and its PACKED with 80’s cult movies! Want to see what’s in the box?