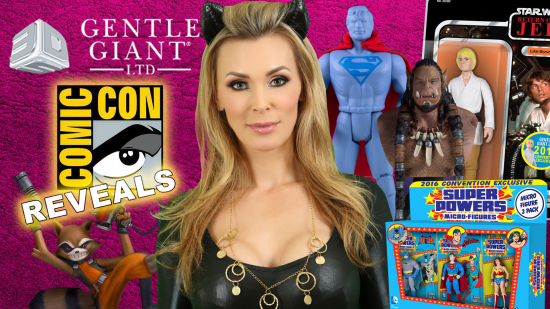 I went by the Gentle Giant studios to check out their exclusives for San Diego Comic Con 2016 and got some video for you!

Comic Con is only just days away, and I am so excited! One thing I love about the show are all the exclusives that you can get only while there. Gentle Giant has loads of awesome exclusives they are debuting at the show. I was able to stop by their studio for a quick tour and to check out all of the exclusives that they have to offer at SDCC 2016.

Watch the video below:

How cool is that? What exclusives are you looking forward to? What are you going to be buying?

I know I really like those super powers jumbo figures and that Chewbacca as well. Looks like I'm going to be dropping a lot of money while there, LOL.

Thanks to Gentle Giant for letting me stop by, make sure you visit them at San Diego comic con! Subscribe to my YouTube channel for more videos, I have a lot coming!

I went by the Gentle Giant studios to check out their exclusives for San Diego Comic Con 2016 and got some video for you!