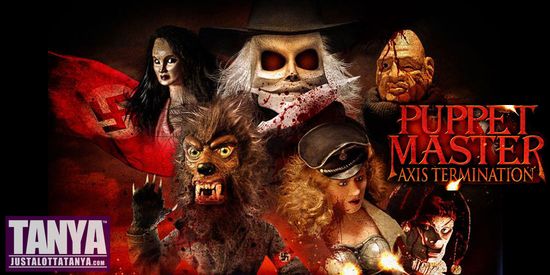 For the 11th entry in the popular Puppet Master series, Full Moon invites fans to participate in a crowd sourcing campaign filled with exciting perks.

Puppet Master fans are going to love this. Full Moon has launched a fundraising campaign on IndieGoGo for the upcoming movie Puppet Master Axis Termination. While it’s great news just to hear that there will be another Puppet Master movie, Charles Band is providing a way for fans to get in on the fun.

By contributing to the campaign there are several exciting perks to be had. Depending on the level of your contribution you can come away with some awesome Full Moon swag or even get killed off on the movie!

Here are some of the perks:

And if you’re lucky – they’ll kill you!

Now, to clarify -  Puppet Master Axis Termination is already full funded and will be made regardless. BUT, the money raised in this campaign will go to making the movie even better - more practical effects, more puppet kills,     stop motion animation and more wild surprises!

For more information and to contribute to the fundraising campaign visit this link: http://igg.me/at/8orKN2XWGBw/x

In the meantime, you can watch all of the Puppet Master movies (as well as loads more Full Moon classics) on demand from FullMoonDirect.com!

For the 11th entry in the popular Puppet Master series, Full Moon invites fans to participate in a crowd sourcing campaign filled with exciting perks.