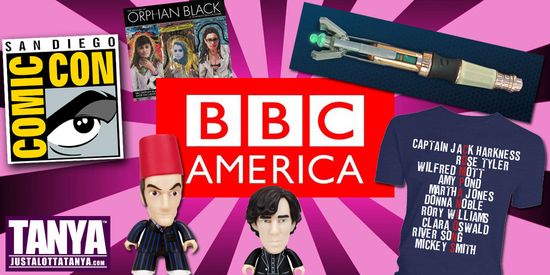 As soon as the doors of SDCC open you are going to want to head straight for the BBC America booth, #4129! They have announced so many incredible collectibles that you might need a TARDIS or two to take them back home.

Making its debut is the Sonic Screwdriver universal remote control from The Wand Company. Modelled after the Twelfth Doctor’s gadget of choice, highly detailed and completely re-engineered working replica of Peter Capaldi’s iconic device will make its exclusive debut at San Diego Comic-Con. 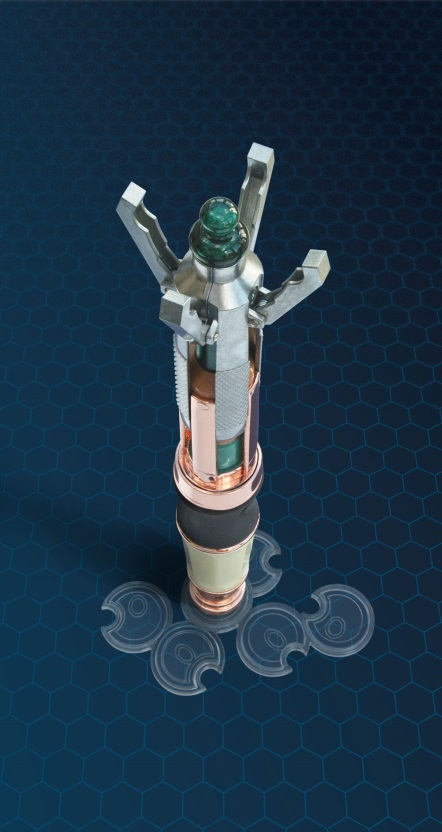 I actually own the 11th Doctors Sonic Screwdriver universal remote and it is really amazing. I’m going to have to get my hands on the new one at Comic Con.

The Twelfth Doctor’s Sonic Screwdriver is individually laser numbered and will come with a signed certificate of authenticity. The limited edition numbered remote controls will only be available at the BBC America booth while supplies last.

You can use the remote on iPod docks, TVs, DVD and Blu-ray players, in fact, pretty much anything that is controlled by an infrared remote control. The 1:1 scale Sonic Screwdriver can store up to 39 remote control commands, is equipped with 12 authentic Sonic Screwdriver sound effects and a customizable personal lock code, and has 12 secret Morse code phrases from the Twelfth Doctor to decipher. Die cast in hand-polished, copper-plated metal, with a new stand that allows the Sonic Screwdriver to be displayed vertically, this device is not only a serious prop that will delight collectors, but with its host of authentic sonic sounds, it is also a cosplayer’s dream come true.

“The keen-eyed Whovian will notice subtle differences between the Sonic Screwdriver favored by the Eleventh Doctor and the one currently used by the Twelfth Doctor. We listened to fans’ requests and have evolved the design to match what’s onscreen, including the fun flick-to-extend feature,” said Chris Barnardo, co-founder of The Wand Company.

The BBC America booth will have loads of other goodies, including exclusives and new releases.

Making their market debut before anywhere else are snazzy Dalek striped socks and “I am the Doctor” socks depicting the Twelfth Doctor. Other Doctor Who limited release merchandise includes a t-shirt, tote bag, and hoodie designed by artist Alice Zhang, a mini-standees pack from Advanced Graphics featuring Twelfth Doctor, Clara, and TARDIS figures, and Tenth Doctor vinyl figures and Twelfth Doctor comic book, featuring a special Comic-Con adventure, from Titan. Get comfortable in a pair of San Diego 2015 lounge pants, show off your favorite characters with a companions t-shirt, and accessorize with a TARDIS charm bracelet and sonic screwdriver dog tag.

Sherlock limited release merchandise includes two t-shirts, a hoodie, a mini-standees pack from Advanced Graphics featuring Sherlock, Watson, and Moriarty figures, and a Sherlock vinyl figure from Titan; and for your resident Clone Club member, BBC AMERICA shop will be featuring a limited release Orphan Black t-shirt. A full list of merchandise is available below.

The booth you are going to want to hit up first is the BBC America booth. You’ll probably run into me picking up some of those Titan figures, they are too cute!

DOCTOR WHO
First to Market (available in the booth before anywhere else)
The Wand Company Twelfth Doctor Sonic Screwdriver Universal Remote Control: $120
Dalek Striped Socks: $13
I am the Doctor Socks: $13