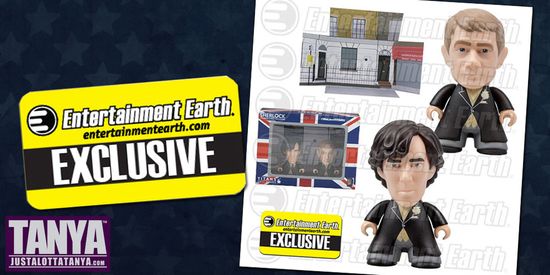 If you love Sherlock, you are not going to want to miss this Entertainment Earth exclusive set of Titans vinyl figures

Ah, remember the Sherlock Season 3 episode "The Sign of Three,” where Benedict Cumberbatch as Sherlock Holmes hopes to give the perfect best-man speech at the wedding of his trusty companion, Dr. John Watson portrayed by Martin Freeman? Well, Titan Merchandise does and have created this awesome set of mini-figures as part of their Titans line. It’s a limited edition Entertainment Earth exclusive, so you can only get this exciting 2-pack from them.

The set comes with two 3-inch tall exclusive mini-figures and a special Union Jack packaging with a removable 221B Baker Street backdrop.

If you have not started collecting Titans vinyl figures, you are definitely missing out. These stylized little collectibles are incredibly fun and there are lines for Buffy The Vampire Slayer, Doctor Who, Aliens, The Beatles, Sherlock and many more. Check them out. I have been collecting the Doctor Who ones and will probably jump on Sherlock next starting with this set.

The Sherlock and John Wedding Suit set is available for pre-order now from Entertainment Earth. Get them here.

If you love Sherlock, you are not going to want to miss this Entertainment Earth exclusive set of Titans vinyl figures