Disney Vinylmation Urban Series 9 - The Chase is on!

Hello! I would like to welcome PHIL! who will be doing occasional guest blogs about the news in Disney Vinylmation!

Some of the designs include a Tattooed Business guy, Gangster Cowboy, Toaster & an Elephant Kid. In my opinion, it’s one of the best Urban sets since Urban 4. 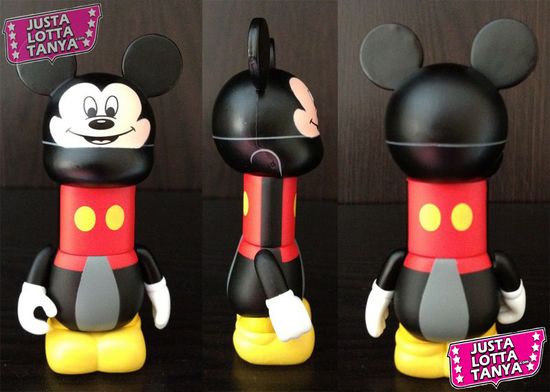 Let’s cut to the chaser. “Funhouse Mickey”. I was not too excited about this one at first. Usually, I’m all for Mickey vinyls. But this one is really funny to look at, which I guess is the point. Once I got the concept for the long-necked figure, it made more sense. It grew on me.

Everyone is always after the chaser, right? Well, not in this “case”. There are 2 variants in this series. A Golden Dragon and a Shaved Sheep. They are HOT! These are the one’s that Vinylmation folks are after. I’ve heard that there are two to a case. Either two Shaved Sheep's or two Gold Dragons (not mixed). But who really knows? I’ve also heard that some cases don’t have any variants at all. What I do know is that the “variants” are the ones to chase. So, head to your local Disney Store and go for the GOLD! Or naked Sheep... either one is awesome.

So my Disney Vinylmation collection has been growing. And one aspect of collecting Vinylmation is the trading. Collectors of these figures trade. So, to fully immerse myself in the scene, I had to join in this activity.

Friday I went to my first trading night at Disneyland! It was mostly geared toward pin traders, I am not much in to that though. I popped by for a bit to see what was going on in the Vinylmation scene.

I have to admit I did not have much to trade, I usually only buy what I like. But I did have a few extra figures that I could part with. Thankfully, LOL! I saw loads of the Disney figures that I needed to add to my collection!

When I arrived at Paradise Pier I was already late to the event. It started at 7pm and I got there at around 9pm. I was a bit taken aback by how many people were there, I really did not know what to expect, but there were a lot people! It was packed.

Virtually all of the people there were extremely cool and being new to trading, they helped me out.

Here are some pics...

Hello!
While I was at Downtown Disney picking up my Cheshire Cat Vinylmation 2-pack the other day, I used my trusty iPhone to take some snaps of the cool things I saw. Lets have a look, shall we?

Distinctive Dummies Brings Hammer's The Mummy Back To Life!

My friends at Distinctive Dummies have a new addition to their Hammer Horror series of figures. In the past they have released 12 inch figures of iconic Hammer characters like Oliver Reed's Werewolf and Peter Cushing as Van Helsing.

Their latest offering is just as spectacular, it is the Christopher Lee version of the Mummy. How about some pictures:

I received an email from a friend of mine with a link to the Disney Store. He wanted to let me know about an odd thing he found. A Vinylmation Mickey Mouse called "Paper Cut". Strange, I could not find it when I used my bookmarked link to the Vinylmation store.